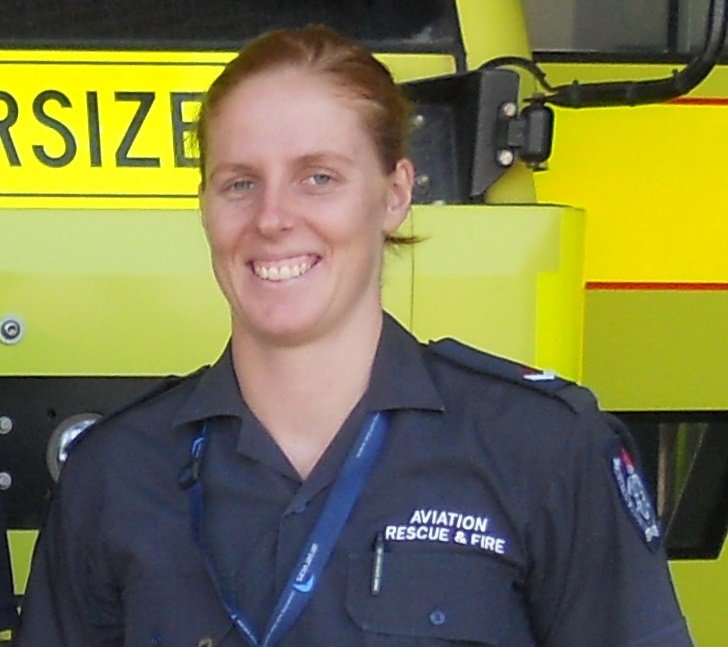 Megan Grant had never heard of aviation rescue and firefighting until it came up as she browsed through the seek.com.au website at her previous work one day. Today, she is an Airservices Aviation Rescue Fire Fighter based at Darwin Airport, Northern Territory, Australia. She tells iWOAW about her unique aviation job.

A day in the life of an aviation rescue fire fighter

My role is an operational in nature. I work a four-day-on four-day-off shift at a 24 hour airport fire station. My job involves responding to any incident on the airport, this can be responding to aircraft emergencies and fires at airport buildings or providing first-aid services for aircraft passengers and crew.

A typical day shift for an Airservices Aviation Rescue Fire Fighter begins at 7.55 am where a handover parade is conducted with the out-going night shift. At the handover parade, the Officer’s on shift will explain the plan for the day and what work needs to be done.

After parade, we conduct daily inspections on the operational fire trucks, this is to ensure the trucks are ready to respond to any incident. After the trucks have been checked, we conduct a training drill. The drill is usually tailored to training that someone might be doing, for example officer development or for a trainee fire fighter. This will usually take us to mid-morning, we try to finish as much of the daily work order before midday.

After midday, if there is more work to be done, we will finish that off, but typically the afternoon is a time for people to conduct their individual training. Nearly everyone on shift has either got self-paced training to complete or they hold a position at the station that requires them to complete further training, for example, the hose technician on shift will continue fixing any faults that may be present. After 3 pm, we are able to use the gym on station, most people on shift will work out for at least an hour. End of shift concludes at 5.55pm. Every day is different, some days we have no turn outs, but on others we are constantly out.

It can be extremely physically taxing, so you want to put yourself in the best position to be able to handle it. Before signing up, I build up my overall fitness, especially upper body strength. Whilst Airservices is recruiting more women, for now, it is not unusual to be the only female on a station. But it is not a negative thing. My time as an Airservices Aviation Rescue Fire Fighter has been rewarding and fulfilling, it has been an exciting challenge that has allowed me to stay fit and save lives.

There are many things I enjoy about my job. Every day is different. One day, we’re responding to a full emergency on the runway; the next, we are providing fire extinguisher courses to airport staff. I like that my job is very hands-on. On a busy day, you’re tired but you feel like you’ve accomplished something. There is also a true sense of camaraderie in the job, I have found that it is very similar environment to the military.