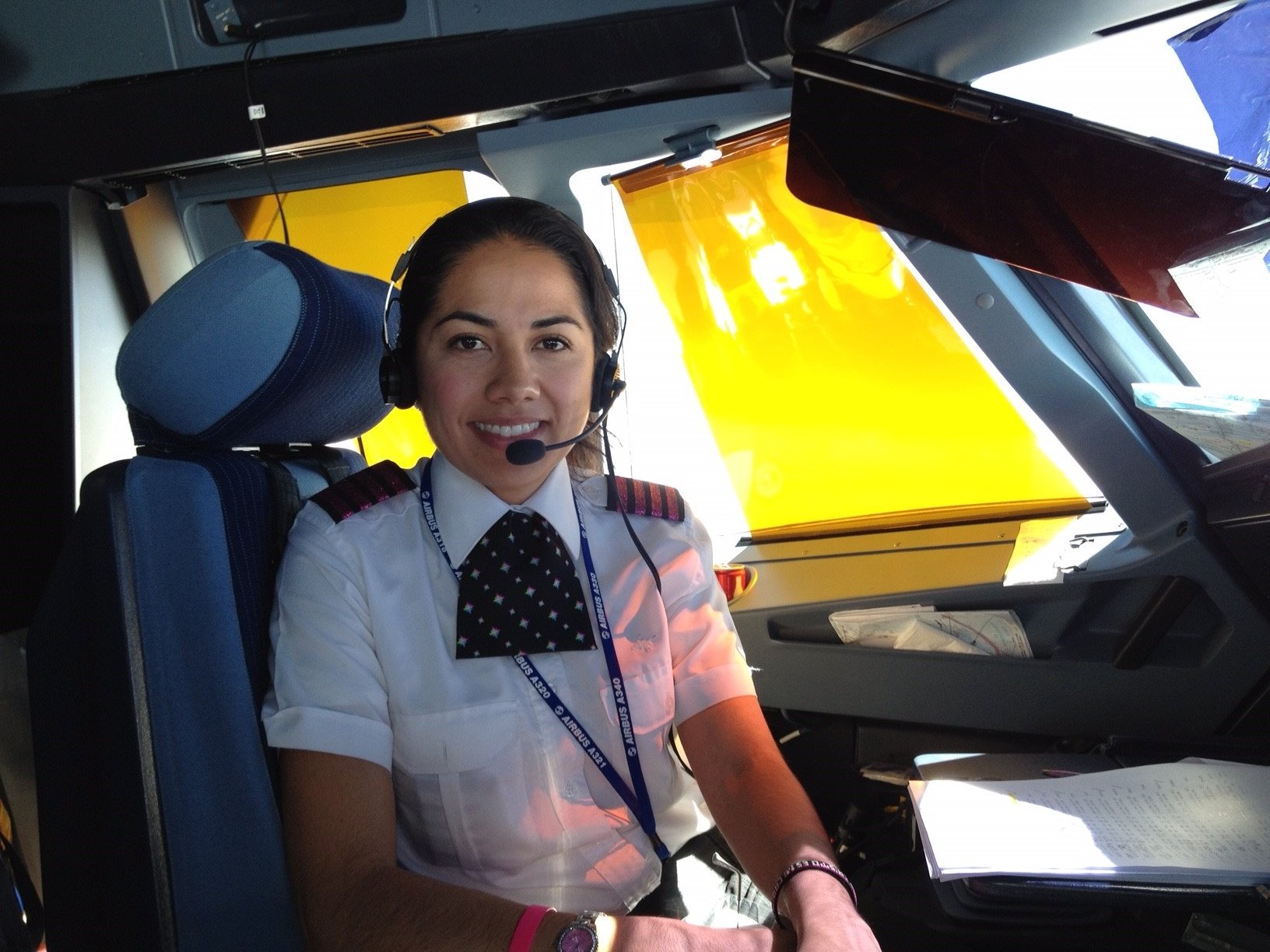 You could say that Jacqueline Pulido was born into aviation. Her parents met at Mexicana Airlines, fell in love, dated, and got married. Her mom was a flight attendant but decided to stop flying when she was 3-4 months pregnant with Jackie. She did not return to flying however she was a true aviation lover. Her support inspired Jacqueline to continue in her career and sustained her during setbacks.

Jackie and her sisters were involved at a very young age in aviation . Their dad, a Mexicana Airlines Captain, took them on his flights when they were little. Jackie was able to sit in the observers seat and watch him fly. That is when, she too, fell in love with aviation.

Jackie began flight lessons in Mexico at 17. When she obtained her Private Pilot Licence, she transferred to a school called Aeronáutica Vitar to work towards her Commercial Pilot Licence and the rest of her ratings.

Today, she works as an A320 simulator instructor and an aviation English instructor. She co-authored the Latinas in Aviation book and is the Mexican correspondent for the Latinas in aviation magazine. She is a member of the Ninety Nines and recently signed up with iWOAW. She organized her first Women Of Aviation Worldwide Week events in 2021.

Despite her strong roots in aviation, getting her pilot career airborne was not easy for Jackie.

She started looking for work back in 2001. She was fresh out of school and found out she was not eligible to apply to some jobs  simply because she was a woman. She was shocked at some comments. The reasons for not considering her as a viable candidate included “women get pregnant”, “women don’t know how to fly”, “the owner loves to cheat on his wife and his wife knows about it so we can’t hire women”, or “we don’t want women in our staff”.  Some workplaces pointed out that she didn’t have enough experience. That was true.

So she knew she couldn’t do anything about being a woman but she could work on expanding her experience. She was determined to prepare herself for success by studying hard. Her Mom drove her everywhere she could drop her resume. The challenges drew her get closer to God and her family. Her faith grew and so did her resolve. She kept knocking on doors until finally, she got a job teaching ground school. She also competed in the International Ladies Cup in the Netherlands for 3 years – a very inspiring experience to her.

She would go to the airport and sit around with her resume waiting for pilots interested in having an extra pilot on board . Little by little, she accumulated more flying experience. She got her next job in the Cessna Pilot Center training department. Eventually, she got her first type rating, a Lear Jet 25 rating. With that, she applied for a position as Second Officer at AeroUnion, a cargo airline, and passed all the screening tests. She was the third woman hired as a pilot there. Later, she got an offer to fly for Volaris. After passing the interviews and screenings, she became the first female pilot hired by the airline in 2005, starting as a first officer.

At the beginning of her training, one of my instructors harassed her. She gathered the courage to tell her co-trainees and her boss and received full support . She was assigned to another instructor and the instructor-in-question was suspended. It turned out that he had a prior record of harassing female trainees. The situation was very stressful and frightening. She was 24.

Looking back so far, Jackie is very proud of her participation in the International Ladies Cup in the Netherlands three times. The female participants inspired her. The event was full of camaraderie and excitement. She was also the first Governor of the Mexico Section for the Ninety-Nines.

Opening the doors for women at Volaris ranks high on her accomplishments list. She was their first female pilot hire in 2005. Today, 42 women are flying for them. She also created an in-flight waste reduction and recycling program called “ Por un cielo azul” for the airline with support from Capt. Andres Fabre. Today, she is one of the rare A320 simulator instructors.

Jackie wants to see more women follow in her footsteps. She found out about iWOAW’s Women Of Aviation Worldwide Week outreach initiative through Ana Uribe, a WOAW event organizer based in the greater San Francisco area. As she read through the website, she loved everything iWOAW does. She saw getting involved as an opportunity to encourage young women and girls in Mexico to consider aviation as a career. She knows that Mexican women still face many cultural issues such as girls not being able to go to school because parents think that boys are a better educational investment as “girls just grow up and get married”. She wants to show girls that they can have traditional roles, get married, have babies, and fly for a living too, if they want.

She hopes that others will join her in opening the doors of aviation for Mexican women and girls. Her advise is to approach it with love and passion first and offer the introduction for free.