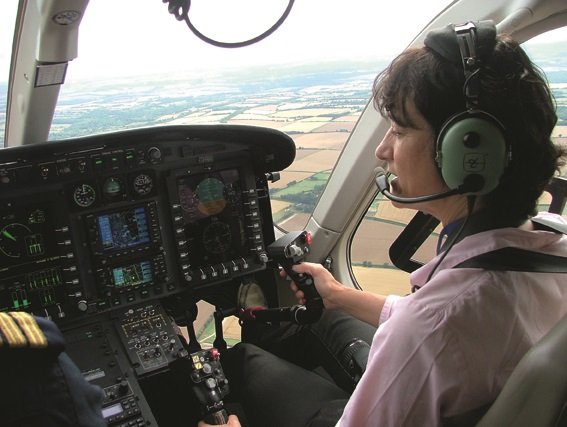 On a day-to-day basis, as a professional helicopter pilot, my life is varied. Some days I teach flying on the Schweizer 300 or Robinson R44, other days I will fly the JetRanger into a wedding venue or a race meeting. About once a week, I fly the London heliroutes (along the river though the capital) with a group of people. On another day I might ‘moonlight’ into fixed wing, doing, “a loop and a roll in the Tiger Moth” to entertain corporate clients. The basic job, though, is instructing on helicopters, which appeals to me as I like teaching new skills and enjoy the buzz of flying a helicopter with like-minded people. Since 2004, I also write about helicopters in Helicopter Life, a magazine I edit.

I went into flying as an adventure. I loved learning new things and travelling and hence flying appealed to me. It was only after I got my private licence that the reality of the cost hit me: I then realised if I wanted to continue flying (which by then had become a passion for me) I would either have to get a very well paid job that still allowed me enough time to fly, or fly for a living. I made my decision for the latter.

I looked at the professional routes available to in the UK. With the ‘self-improver’ route, the next step was instructing, followed by small twins in corporate flying until you had enough aviation experience, and then on to the airlines. I got an instructor’s rating and started ‘hour building’ and would have continued up that route but someone suggested I try helicopters. I did, and my life changed.

Helicopter flying in the UK offered two main professional routes: VIP travel and instructing. (There were a few fledgling outfits for police and air ambulance, but these were known to only take ex-military pilots, and in the UK women could not fly in the military until the until 1990s). I decided to stay in instructing. I had discovered from my fixed wing experience that instructing was enjoyable, and, if you had an element of creativity and a student who also enjoyed learning, you could do a lot of interesting flights together. For example, I flew to Moscow with a student to take part in the World Helicopter Championships in 1994. We did not do very well in the competition but we had amazing fun flying the Robinson R22 there and back via Holland, Germany, Poland, Byelorussia and Russia itself. Two years later we competed again in Salem in Oregon.

When not teaching helicopters I joined the Barnstormers. This was a group of tail dragger pilots (Tiger Moths, Super Cubs etc) who flew across the country to air shows and had acts like ‘stand on wing’ and crazy flying. I became the only female to pilot the stand on wing at the time, including flying with my mother standing on top of the Tiger Moth, to become the first mother and daughter wing walkers!

In 2004, my husband and I started a magazine, Helicopter Life, which catered entirely to the helicopter industry. I was able to continue instructing part time, and we travelled to other countries seeing what professional avenues were open to helicopter pilots. These were varied, as well as Air Ambulance, Police, SAR, oil rigs, Fire fighting, film work and VIP, there were some more esoteric forms of helicopter flying, such as deer herding, cattle round-ups and, in places where the USA had once been involved in war, such as Laos, the collection of body parts for missing person recognition.

When I became a helicopter examiner, in 2009, the UK had joined EASA (as part of The European Union) and this gave an even wider remit. I was able to travel across Europe doing helicopter PPL tests, something that opened my eyes to the different maps and navigational techniques of different regions.

During the 35 years I have been flying the professional has changed enormously. The breadth of jobs has increased everywhere. Women are now allowed to fly in the military and to fly out to the oil-rigs (the first woman to fly out to an oil rig was told she had to remain in the helicopter after they had landed for her own safety!) There are many air ambulance and police helicopters and a large proportion of the pilots have only been in the civilian world. Defence spending in the Western world is reducing, and many pilots now go to Middle and Far East, South America or Africa to work. The career path that I took to give me an adventure has now even more potential than before. And, to show it is possible to maintain a work life balance with an aviation career, I now have two grandchildren.