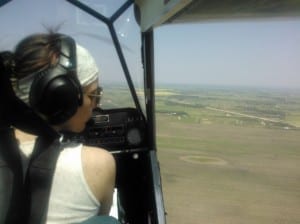 I started flight training in mid-March, 2013. I had finally realized that thing that was going to make me happy in a career was going to be flying, and set on a path to getting a commercial licence. The first few lessons, I had the time of my life. I had never been happier.

They gave me the name of a good aviation medical doctor. I got to the doctor’s office and it seems I’m disgustingly healthy overall. Then there’s the questions on your medical history. I don’t have a lot of hereditary problems in my family – no heart disease or diabetes, none of those things the worry about with pilots.

But then there’s the “Do you have a psychological disorder or condition?” I honestly hadn’t thought about it in all the excitement of getting started with lessons. But of course I had to say yes, I was diagnosed with mild Aspergers Syndrome when I was twenty one. Is that going to be a problem?

Well, it’s something they handle on a case-by-case basis, said the doctor. He didn’t figure, having met me, that it would be a flat no-category1-medical-for-you situation. But he’d never had a patient with Aspergers before, so he wasn’t sure. He did tell me that, worst case scenario, they would want me to see a psychiatrist for an evaluation.

As an afterthought he said “You know, from what I know of Aspergers Syndrome, I would think it would be more likely to make you a better pilot.”

That made me feel better. And it made sense – people with Aspergers do typically have a higher than average IQ, and tend to give a lot of attention to detail. I reassured myself that whatever answer Transport Canada came back to me with, I could do whatever they needed me to do to prove that there was nothing wrong with me that would interfere with my ability to pilot a flying machine.

Time passed, and I waited for my letter from Transport Canada to tell me what the next step would be. As I waited, I started to get anxious.

I googled “Aspergers+Aviation”, and the only article I could find was an account of a commercial pilot having his medical revoked after being diagnosed with Aspergers Syndrome.

I told myself, now, this guy apparently had a tendency to buck rules that he couldn’t see a reason for, or do silly things just because there was no FAA rule against it – like apparently flying in fuschia gorrilla costume. But his medical was revoked based on the diagnosis of Aspergers Syndrome. I told myself that this guy probably has a much more severe case of Aspergers than I have.

I mean, sure, I can be an odd duck at times – I’m a geek, and I like geeky things. But suddenly I was panicking that Transport Canada would take issue with the fact that I go to sci-fi conventions and wear costumes.

I started to worry that it wouldn’t matter that I’ve financially supported myself and my disabled husband single-handedly with a steady job for the last four years, or that I was five years happily married, and that they would judge me for all the things that people shouldn’t be judged on.

And I kept waiting for that letter, continuing into 30 hours of dual instruction time, but unable to do my first solo because they couldn’t issue me a student licence without my medical clearance. My imagination got away sometimes, and I worried that I would end up a casualty of an ignorant, unreasonable system that would judge me incapable of something I was perfectly capable of doing, based on a label.

The letter finally came, asking for a report from my “attending physician.” I had no clue what they meant by that, so I called them, and I was advised that this referred to the psychiatrist I saw regularly for treatment of my condition and who prescribed my medications for it.

Um… that’s a problem, I told her. I’ve never seen a psychiatrist outside of getting the diagnosis, never needed treatment, and never needed to be medicated for Aspergers.

Well in that case, she said, I should get my family doctor to write up a report confirming that, and they would decide whether or not they would require me to see a psychiatrist based on that.

I never did see that psychiatrist. My family doctor wrote them a lovely report and my category 1 medical certificate came in on April 17th. My instructor sent me on my first solo the same day.

Now I have my private license and am working on my commercial. So yes, someone with Aspergers Syndrome can fly commercially.