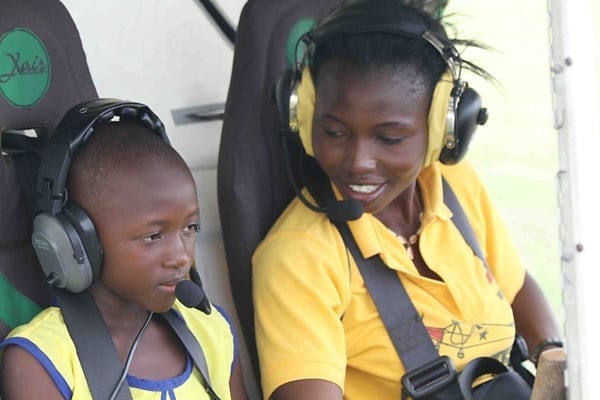 On March 8 2010, Medecine on the Move at the Kpong Field in Ghana threw a big party to celebrate the Centennial of Women Pilots. They introduced 97 girls and women to flying in one day! There are back.

On March 5 2011, 67 girls and one woman took flight for the first time in the skies of Ghana. At 6:30 AM, the first bus loaded with children from Techiman arrived at the airport. Soon thereafter, children from Kete Krachi, a 24-hour boat ride, children from Asesewa area, a rural area near the lake edge, and children from Somanya joined them.

Looking across at the fence line, the smiling face of the first youngster of the day changed the overcast to the brightest sunshine you could imagine. Life itself emanated from each of the youngsters as they approached the aircraft and pilot that would release them from the bonds of earth for a few minutes.

It took five hours of non-stop flying but at the end of the day, these young people were changed and changed those around them, magnificently.