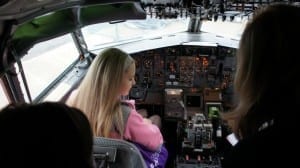 Chicago is always known as the windy city. As windy as it may be, it didn’t stop women making many aviation firsts.  In 1911, Chicago hosted the first International Aviation Meet in the United States.  Just one year later, Katherine Stinson, became the fourth, as well as the youngest, woman to earn a pilot certificate.  In 1915, she became the first woman in the United States to perform a loop-the-loop.  She did all her training at Chicago’s Cicero Field.

The ladies of Chicago’s Leading Edge Chapter of Women in Aviation, International are following in the footsteps of Stinson and helping others become pilots, too!  During Women Of Aviation Week, the chapter will be hosting “Sky’s the Limit!” aviation camp for girls.

The camp will consist of six sessions, each running around 30 minutes.  Girls in groups named after female pioneers in aviation will have their chance to enjoy each session and learn all about aviation.  Lunch as well as a prize raffle is included in this free event.

Join the ladies of Chicago make their own history on March 9th at Lewis University in Romeoville, IL.  What “firsts” will “Sky’s the Limit!” spark?  Will campers be performing loop the loops like Stinson in the years to come?