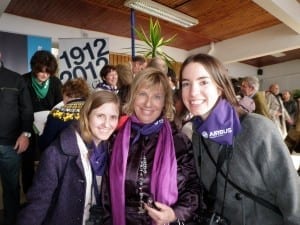 Pilots from 7 countries piloted ultra lights, homebuilts, single and multi-engine airplanes, as well as helicopters to introduce a total of 1,104 girls and women to the joys of flying during the second annual Women Of Aviation Worldwide Week held from March 5 to 11, 2012 – a 40% increase of flights over the preceding year.

Meanwhile, all across North America, pilots joined in the celebration by taking girls and women from their community for their first flight in a small aircraft. 1,063 flight introductions were documented on March 10, 2012 alone.

In Yellowknife, Northwest Territories, Canada, 27 local businesses as well as the Canadian military rallied around helicopter bush pilot, Kirsten Brazier, to provide static displays as well as funds and logistics to allow four of Trinity Helicopters’ pilots – Kirsten Brazier, Megan Tyler, Derrick Robinson, and Robert Ferlisi – to take over 400 local girls and women on their first small aircraft flight and, in doing so, earned the Yellowknife Airport, the coveted “Most Female-Pilot-Friendly Airport Worldwide” title.

The four pilots also took top positions in the “Most Dedicated Woman Pilot Worldwide” and “Most Supportive Male Pilot Worldwide” categories. These categories were a Canadian sweep with Lesley Page of Oshawa, Ontario, earning the second runner up position of the women category while Hubert Wren and Ron Hasman of Peterborough, Ontario, Canada, tie in the second runner up position of the male category.

Making a difference in one’s own community is an essential characteristic of Women Of Aviation Worldwide Week activities. In Frederick, Maryland, USA, pilot Victoria had to put pilots and passengers on a waiting list due to the overwhelming enthusiasm.

Nearly 60 more girls and women flew for the first time than did in 2011. The total, 244 introduction flights, helped Frederick reestablish itself as Most Female-Pilot-Friendly Airport in the United States and earned it the first runner up position worldwide. Frederick was also home to the Most Supportive Flight Instructor Worldwide and first runner up in the category, Ron Herold and Richard Finati, respectively.

The Spirit of Women Of Aviation Worldwide award that rewards the woman that undertook the most women of aviation activities within the year was awarded to Lesley Page of Oshawa, Ontario, Canada, who not only personally offered many flights to girls and women throughout the year but also gave speeches in her community about Women Of Aviation and mentored several event organizers.

In partnership with Airbus and with the support of our generous sponsors, many prizes were awarded to participants. Four pilots each won a Sennheiser S1 Digital headset. One pilot won a one year subscription to Baron’s Quicklink Wings Elite Plan, while another won Barry Schiff’s entire collection of books. Other prizes included Aircraft Spruce gift cards, OSRM courses, Powder Puff t-shirts, and Windtee books. The winners of the FFPLUM flight coupons will soon take their first flight lesson in ultra lights while the winners of the writing and art contests will select a flight school and type of aircraft for their first lesson.

“I so enjoyed the experience….I can’t wait to fly again,” said Karen, Frederick, Maryland, USA. In fact, 92% of our feedback survey respondents said that they would consider becoming involved in aviation as a result of the experience.

Congratulations to everyone who participated!