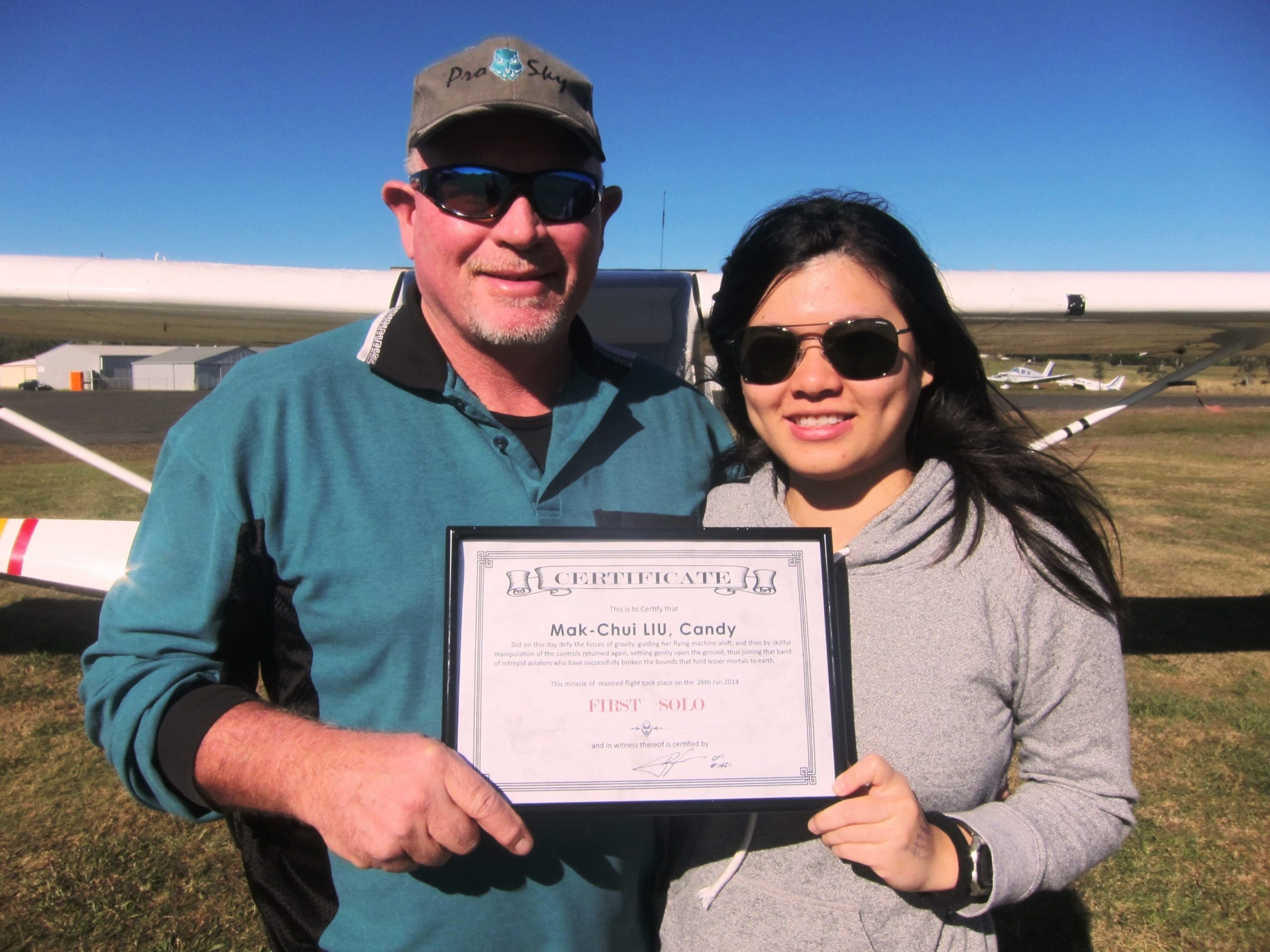 Alone at the controls of an aircraft for the first time, Mak-Chui Liu, Candy made a perfect landing at the Gympie Airfield in Queensland, Australia, on June 26, 2014. She became the first among thousands of women who participated in the 2014 Women Of Aviation Worldwide Week’s eligible activities to solo and will receive the top prize, $1,500 USD towards flight training offered by Sennheiser Aviation, an IWOAW member-partner.

“I did what I’ve learnt and landed the plane safely. I know that it was not a big deal but it just felt really different when you were the Pilot-In-Command and for that moment you were the only one who could land the plane, no one would make any judgement except you. It felt great flying the aircraft alone,” said Liu after her solo flight experience.

One of her customers at the Sushi restaurant where she worked to earn money towards her flight training tipped her about a great flight instructor, Brett Soutter of Pro-Sky flight Training in Gympie, a 2-hour drive from Brisbane. In his 25 years’ experience as a flight instructor, Soutter has rarely taught students with Liu’s level of enthusiasm.

“The truly rewarding aspect as an Instructor is seeing Candy take her keenness and apply it throughout her training,” observed Soutter. “I am sure Candy will go on to pursue a career in aviation … we’d be at a loss for it if Candy didn’t.”

After completing a mechanical engineering diploma, Liu, a resident of Hong Kong, China, traveled to Australia for a one-year working holiday with dreams of learning to fly in the back of her mind. When she returns home in three months, she will attend engineering school again but this time, it will be towards obtaining an Air Transport engineering diploma. Her ultimate goal is an airline career.

The First-to-Solo Challenge rewards women who choose to materialize their aspirations after participating in activities organized to celebrate Women Of Aviation Worldwide Week, a global awareness week that promotes aviation specifically to the female population. Each year, the first woman in the world that soloes wins a prize.

“We believe in helping those who help themselves,” explained Mireille Goyer, Founder and President of the Institute for Women Of Aviation Worldwide. “That’s why we attribute thousands of dollars’ worth of prizes to individuals who take action each year. Candy’s path is a statement to the effectiveness of combining positive messaging, barrier-free access, and well thought out incentives.”

Likewise, Sennheiser Aviation is dedicated to supporting its constituency through several programs including its Live Your Dream program.

“We are proud to be a premier sponsor of Women Of Aviation Worldwide Week and believe this event plays an important role in inspiring female pilots all over the world,” commented David Dunlap, Director, Sennheiser Aviation. “Education is the key ingredient that helps make dreams of flight become a reality. Through our partnership with the Institute for Women of Aviation Worldwide and our own Live Your Dream program, we are proud to bring one aspiring female pilot one step closer to achieving such a distinguished goal.”