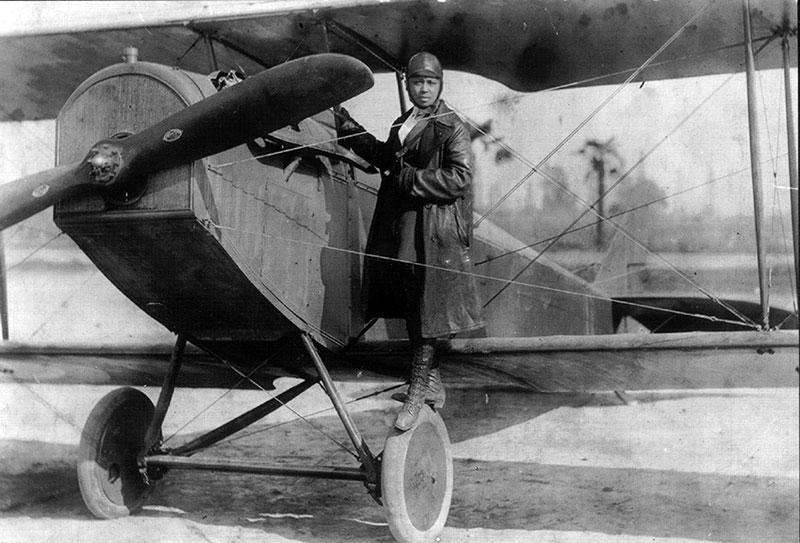 By 1920, women had piloted all kinds of aircraft, crossed large bodies of water, flown in combat, and obtained patents for aircraft design. These women had a lot in common. They were daring, determined, resourceful and, Caucasians.  That would not last.

In 1918, Tadashi Hyodo became the world’s first Asian woman to take flight training at the Tsudanuma aviation school in Japan. At the time, one minute of flight cost 2 yens or 1/20 of a college graduate’s monthly salary. She worked to pay for her lessons.

Meanwhile, Bessie Coleman, a young Black woman in the Chicago area, USA, was dreaming of learning to fly. She began to look for flight training but run into race-discrimination at Caucasian-owned flight schools and into gender-discrimination at Black-owned schools.

By 1920, she had decided to travel to France to train as most women who wanted to learn to fly but faced discrimination at home did. Of course, first came learning French. By late November of that year, she was on her way.

Back in Japan, Hyodo was continuing her training – slowly. In April 1921, Japan established its pilot licencing system.

As soon as she set foot in France, Coleman began to progress through her flight training at a fast pace. On June 15, 1921, she became the world first non-Causasian woman to earn a pilot licence. Nine months later, Hyodo obtained hers.

To celebrate, the 2021 Women Of Aviation Week theme is 100 Years of Female Pilots of All Races. The annual theme motivates the Inspiration Challenge entries and many of the local activities.

Let us celebrate our racial diversity.