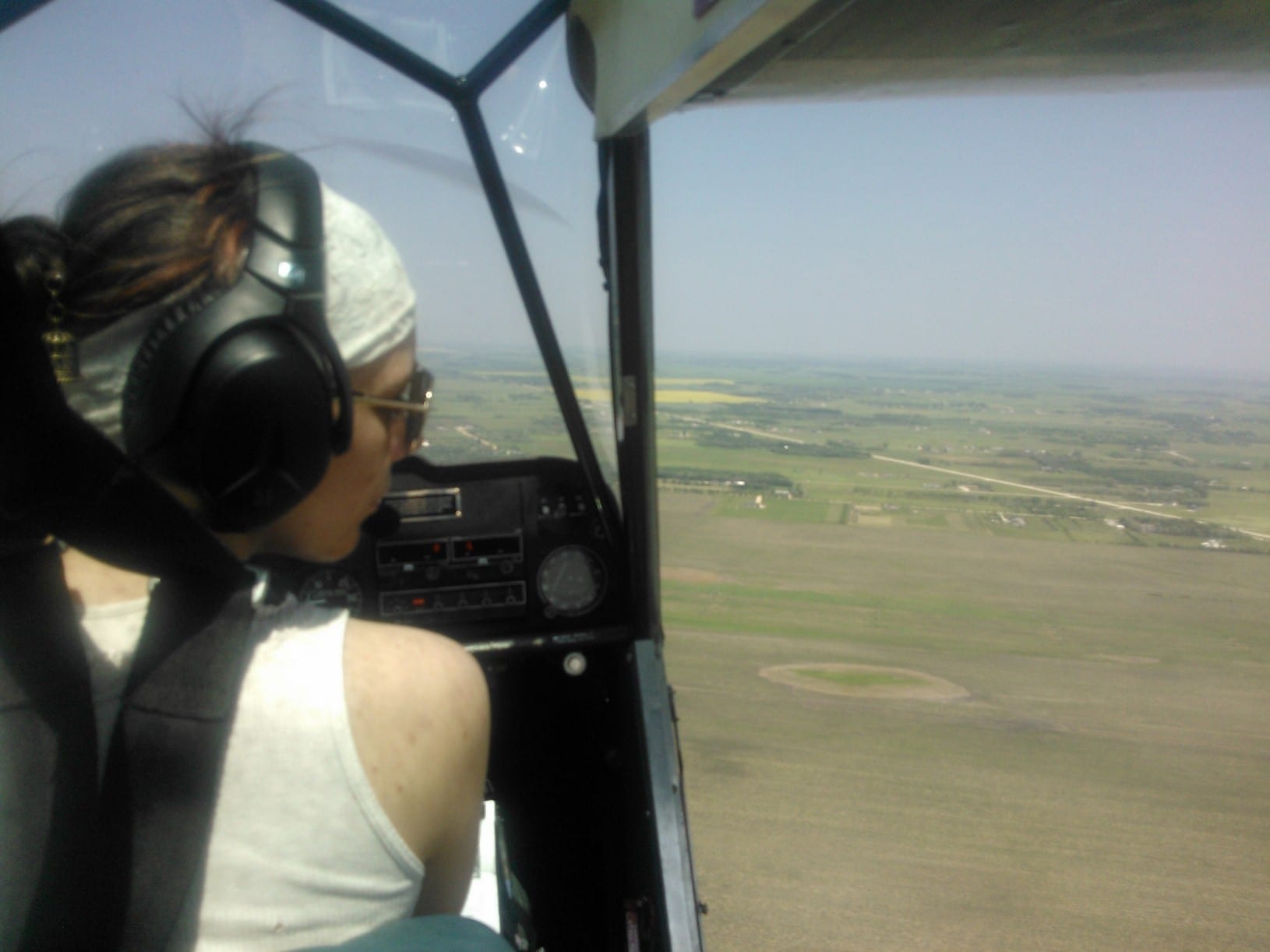 Lindsay Kitson was always fascinated with the idea of flight so much so that she had been writing novels about pilots for several years. However, all her female relatives had stereotypical female jobs – nurses, teachers, secretaries, homemakers, etc. and she had never even met a female pilot.

Everything changed when she heard about the event organized by Jill Oakes at the St Andrews Airport as part of the 2013 Women Of Aviation Worldwide Week celebration. She realized that not only was learning to fly something that someone like her could do it was also something that she passionately wanted to do.

Most of the flight schools in the Winnipeg area took part in the event. Lindsay chose Harv’s Air where Sandra Proulx, a Class I flight instructor who started there as a dispatcher, had been teaching for 9 years.
“I’ve always loved teaching and sharing my love of flying with others. That’s why I’m still instructing,” said Proulx. Interestingly enough, Proulx was the first female pilot that Kitson met.

Like most pilots to be, Kitson had passion. “I’ve honestly never been so happy since I started flying,” she exclaimed. Like for most pilots, the path to her pilot license was not a straight road but she had surrounded herself with a highly nurturing aviation community.

“Lindsay has been very focused in getting her flight training done. She always comes prepared for her lessons, and is very active in her learning,” remarked Proulx. “We have maintained a very intense pace because that is how she wanted to do it, and we (Harv’s Air and I) did everything we could to keep that going.”

Of course, Kitson was aware of a small incentive to turning passion into action and success. Women Of Aviation Worldwide Week offers prizes annually to the first female who discovered flying as part of the celebration that solos. Kitson had registered for the challenge.

With all the excitement of learning to fly, what she had not thought about until she came across the “Do you have a psychological disorder or condition?” question on the medical form was an earlier diagnostic for mild Aspergers Syndrome.

The medical examiner had never dealt with such a case. Having spoken with Kitson, he felt that her case would not be a flat ‘no category 1 medical for you’ situation. However, it was up to Transport Canada to decide.

Kitson could have wondered off and away from learning to fly during the waiting period but her nurturing training environment would not have it that way.

“We actually moved onto some other exercises to keep her training going rather than stop it while waiting for the medical,” said Proulx.

When Transport Canada learnt that her mild medical condition required no medications and no medical oversight, it came down to a little paperwork.

Her Category 1 medical certificate arrived on April 17. The same day, she soloed and, in doing so, won the 2013 Women Of Aviation Worldwide Week’s solo challenge.

A few weeks later, she had completed the cross-country phase of her training and was preparing to pass her flight test. Thunderstorms and cloud ceilings of 2000 feet were forecast for the day of the test. They never materialized. She passed her Private Pilot test less than two months after she soloed and three months after she started flight lessons.

“I think the most challenging part was fighting through the anxiety before my flight test. It was just anxiety over it all, and not wanting to let Sandra down,” she remarked about her flight training experience.

The most rewarding part for Kitson was taking her first passenger for a ride. It was her husband Nathan, who had been amazingly supportive through the training but he had never been in an airplane in his life.

“It’s really a special honour to be the first pilot to take someone flying, and doubly so when it’s someone so close to me,” she noted. “I’d really love to be able to be one of the pilots taking up girls next year for Women Of Aviation Week.”

Today, Kitson is continuing her training towards a commercial pilot license in the aviation community that adopted her. If you fly into the St Andrews Airport, Manitoba, you might meet her if she not “gone flying”.

Her passion, her determination, and her drive were key ingredients to ensure her flight training success but so were the great instructor, the supportive flight school, the understanding medical examiner, and the flexible Transport Canada system that welcomed her and believed in her.

It takes an aviation community to foster a pilot.