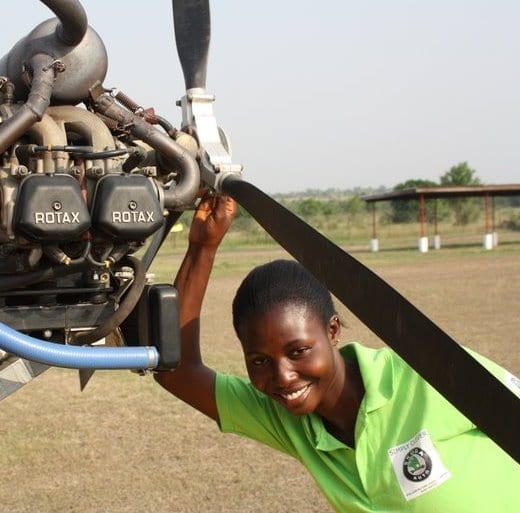 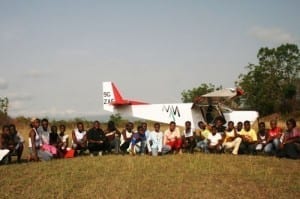 She and Jonathan Porter answered the call to celebrate the anniversary by organizing an event to introduce local rural teenage girls to aviation by taking them for a free flight in a small airplane. On March 8 2010, they flew 97 girls as part of a worldwide initiative, the Centennial of Licensed Women Pilots, the predecessor to Women Of Aviation Worldwide Week.

Their accomplishment inspired pilots all over the world to take up the cause and hold events all year long, resulting in 1,600 girls and women discovering the joys of flying in thirty six countries on four continents. Ghana earned the title of second runner up for the “Most Female-Pilot-Friendly Airport in the World”.

Patricia and Jonathan did not undertake this effort to win titles, although they were pleased that their success drew worldwide attention to the reason for their efforts – changing lives!

Medicine on the Move, The AvTech Academy and WAASPS use light aviation to change lives, one flight at a time. They raise awareness of important health messages by dropping health education materials from aircraft flying over the villages. They promote general aviation appreciation by inviting young people from the rural areas to come and experience the wonders of flight.

And they look for candidates for their academy. In fact, each year, approximately 6 girls are offered scholarships for a 4-year program, building, maintaining and flying light aircraft, learning basic medical care, use of robotic machinery in production, computers, etc in a vocademic environment.

March 8, 9, and 10 2013 will be the Fourth Annual “Fly Me Day”. Once again, approximately 100 girls from the rural areas will be given a free flight and will experience the magic of flying.

During the flying event, a missing woman formation will be flown to honor the life of Kitty Houghton, a pilot, an educator, and a philanthropist. Kitty had worked extensively in West Africa, and was planning to attend the “Fly Me Day” event and even fly some of the girls herself. She was looking forward to returning to a region that she held close to her heart, but tragically, she died before she could do so.