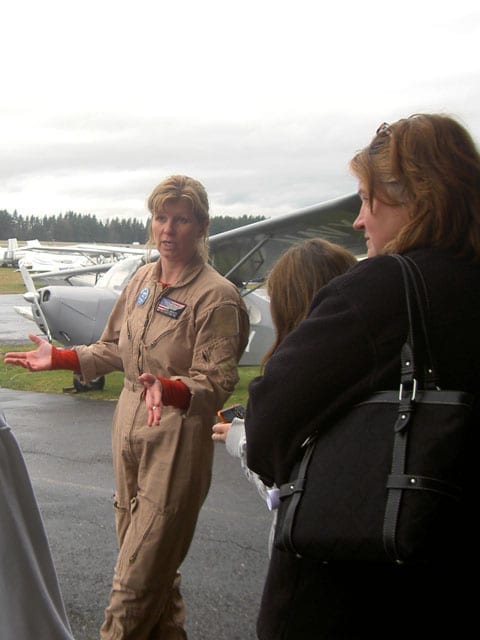 “It was just SO refreshing to see the women really excited about flying (and of course talking planes at my hangar),” said Cathy, organizer of the event held today in Peterborough, ON. “The response was just amazing. The COPA group is already planning next year’s Women of Aviation event,” she adds.

This was only one of the locations where girls and women took flights today to celebrate the 100th anniversary of International Women’s Day and the first annual Women Of Aviation Week. Frederick, MD, also had a huge event planned. I can’t wait to get the details on that. I saw many positive comments posted on Facebook so it must have been fun.

I decided to visit the Arlington, WA, event organized by Cathy, owner of Out of the Blue Aviation. The weather? Well, it was a typical March day in the Northwest. We have a saying in this part of the world: “If you don’t like the weather, wait a few minutes, it will change.”

When I arrived in early afternoon, the event was in full swing. Over 110 girls and women had taken flights in a helicopter, a light sport airplane, a tailwheel airplane, and many other airplanes. The cake which I was told included the Women Of Aviation Worldwide logo, had mostly disappeared.

But girls and women kept coming and the airplanes and the helicopter kept lining up to pick more excited girls and women. Pilots and newcomers were sharing their thoughts about flying. Smiles were warming up the atmosphere better that the absent sun could have ever done.

What a great day! Tomorrow, I am off to Renton.