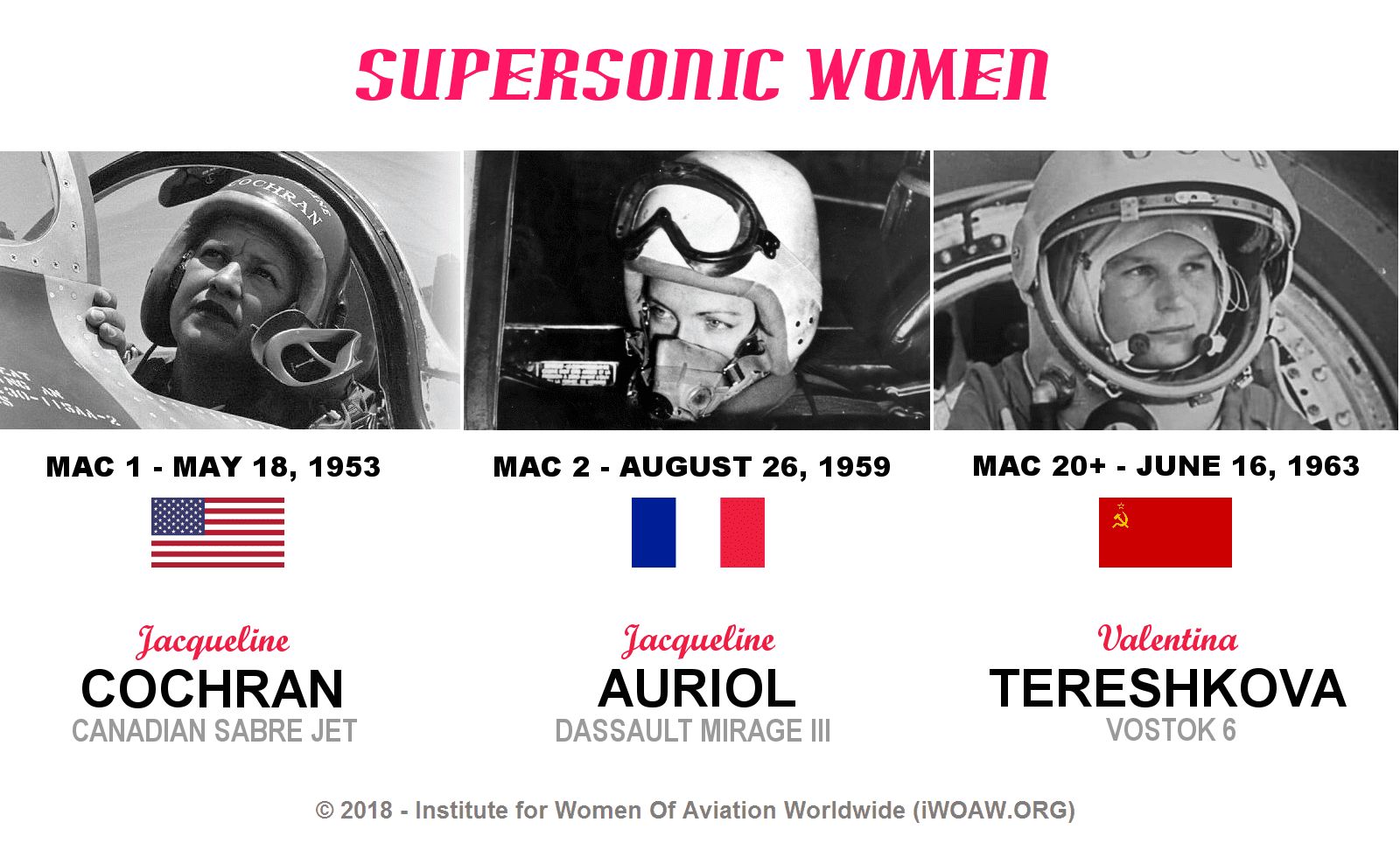 “After six or so flights in the Sabre, I figured she knew it well enough, so I took her up to 45,000 feet and told her to push her nose straight down. We dove together, wing to wing, kept it wide open and made a tremendous couple of sonic booms over Edwards. She became the first woman to fly faster than sound and forever after, she loved to brag that she and I were the first and probably last man and woman team to break Mach 1 together,” recalled Chuck Yeager.

When Jacqueline Cochran made history on May 18, 1953, she had turned 47 years old seven days earlier. Business is what led her to learn to fly in 1932 but she soon became addicted to competition and speed. She entered air races and was the first female pilot admitted to compete in the United States’ most iconic air race – the Bendix race. Cochran was also the only woman to win the race.

The fun stopped when World War II erupted. Cochran relentlessly advocated for the inclusion of women in the U.S. Air Force. She is famously quoted for declaring: “I can cure your men of walking off the [flight] program. Let’s put on the girls.”

Eventually, Cochran directed the newly formed Women’s Airforce Service Pilots (WASPs) unit and personally trained more than 1,000 of its female members. In 1944, the unit was dismantled and women were out of American military flying once again. In fact, in 1953, the U.S. Air Force refuse to lend one of its supersonic jets to Cochran. She turned to the Canadian Royal Air Force and broke the speed of sound on a Canadian Sabre jet.

Her speed record did not stand for long. On August 15, 1953, just two months later, Jacqueline Auriol flew a Dassault Mystère-II over Brétigny-sur-Orge, just south of Paris, France, at the speed of sound as well.

Auriol learned to fly in 1948 after World War II which she spent in hiding with her children due her husband’s activities in the Resistance. Although she was a passenger in a seaplane crash that severely injured her in 1949, she continued to fly. In fact, she became the first woman to integrate France’s Military Flight Test Center and the world’s first woman to hold a test pilot license. As part of her duties, she flight tested more than 100 types of aircraft including the Concorde, the world’s only operational supersonic airliner to date.

For more than one decade, the two Jacquelines competed for speed records piloting aircraft at the edge of the fast-evolving technology in their respective countries. In the process, Auriol became the first woman to fly at twice the speed of sound on August 26, 1959.

The competition between the two Jacquelines at a time when most women listed ‘homemaker’ as their job title made headlines. The movie ‘Supersonic Women – a Duel in the Sky‘ (available in English and French) documents the exciting air duel that fueled the largest female population growth in history. It is a great movie to share in classrooms and at events to celebrate Women Of Aviation Worldwide Week 2018.

Meanwhile, in the U.S.S.R, young Valentina Tereshkova was fascinated with parachute jumping. She made her first jump on May 21, 1959. Her parachute jumping skills made her standout among the 400 female candidates selected as potential cosmonauts in the early 1960’s. Tereshkova went through intensive training which included more parachute jumps and piloting a MIG-15 jet.

On June 16, 1963, strapped into a Vostok 6 rocket, she blasted into space at more than 2o times the speed of sound becoming the world’s first female cosmonaut.

Women were instrumental in developing supersonic flight – and ultimately space travel – at all levels of the air and space industry. Less publicly promoted are the contributions of female scientists like German Johanna Weber who was key to the development of supersonic aircraft wings and Mary Jackson, NASA’s first black female engineer, whose research focused on supersonic aircraft nose shape design.

This Women Of Aviation Worldwide Week, let’s celebrate our proud supersonic heritage and the women who continue to contribute to supersonic flight today. Let’s Fly It Forward® at supersonic scale and with the same healthy global competitive spirit to usher in the next generation of supersonic women.