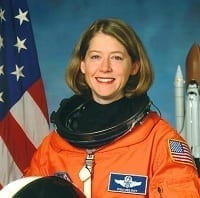 On March 9 2013, a retired Air Force test pilot and NASA astronaut, a NASA scientist, and a MDA space engineer will answer questions that girls and women who registered to go on their first flight asked.

At events or at home, girls and women will have a chance to view the presentations live streamed on the internet from Frederick, MD, USA and Ottawa, ON, Canada.

The day of inspiring life choices and experiences shared by three accomplished women will begin at 9:00 AM Eastern Time (14:00 GMT) and will continue until 3:30 PM Eastern (20:30 GMT).

Dr. Manta Patel Nagaraja holds doctorate in biomedical engineering and has a long and varied career at NASA. She trained astronauts who flew aboard both the U.S. Space Shuttle and the International Space Station (ISS), became a certified flight controller for the communications system of the ISS, and currently manages the Agency-wide Women@NASA project.

Recently, she started the interview process for the upcoming astronaut selection for 2013 class.

In her spare time, she volunteers as a role model with FabFems, runs marathons and half marathons across the world, and travels the world performing outreach in developing countries.

Before becoming an astronaut, Colonel Melroy had a long pilot career in the Air Force and flew in combat. She has piloted 50 types of aircraft. She was a test pilot in the C-17 Combined Test Force and as such, set 7 world aviation records. She also developed and flew first-ever C-17 air show demonstration.

Since retiring from NASA in 2009, she has held management positions and currently acts as Deputy Director of the Tactical Technology Office of DARPA.

With degrees in Mechanical and Aerospace Engineering, Natalie has co-authored papers on flames burning in microgravity and repairing broken satellites in space. She has spoken at TEDx and on the panel for Women in Aerospace International Women’s day.
Natalie is an advocate for encouraging women to dive head-on into challenging careers and take risks, recognizing that we need to foster innovation in order to challenge the foundations of our generation and the next. She is also an avid adventurer, always looking to fill any free time with the outdoors and exploration.

Don’t miss this fantastic program. Join us on March 9. Activities at several events will also be available to view.