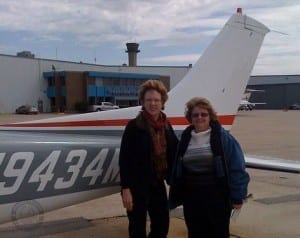 Over sixty events are planned around the world in celebration of Women Of Aviation Week, 22 of these are in the United States alone!

Hoping to encourage girls and women to also become airline pilots and flight instructors someday are the pilots of Queen City Airport in Allentown, PA. Women Fly! Presents an aviation expo on Saturday, March 9th. Interactive discussions with professionals in the industry and static displays will fill the expo, while the EAA will be providing free Young Eagles flights.

Further up the east coast a newly announced event is taking place in the state of Maine; known in aviation as the start of the first transatlantic balloon flight, and the ending point of the first transatlantic jet flight. At the Eastern Slopes Regional Airport in Fryeburg, Maine, Western Maine Aviation and the Ninety Nines present ‘Women Interested in Aviation Day’, where all curious female minds will have the chance to sign up for a free introductory flight! Maybe after their flight, they may go on to some transatlantic adventures of their own!

Across to the other side of the country, in Arizona is where 2nd Lt. Marilyn Koon, became the first female pilot in the Air National Guard. It also happens to be a state hosting ‘Girls’ Day at the Flandreau Planetarium’ in Tucson, Arizona! Members of the Tucson Chapter of the 99s, members of AIAA, Members of the Society of Women Engineers, and Pima Air & Space Museum’s Curator of Education, Mina Stafford, will help local Girl Scout troops explore careers in aerospace and engineering. Special guest and author, Pamela Hale will be on hand to tell the girls about flying as well having her book ‘Flying Lessons’ available for sale and to sign.

‘Women Take Flight – and Girls Too!’ is the title that perfectly describes an event in Albuquerque, NM at Double Eagle Airport. Free 15 minute flights will be available to girls and women who have never flown in a small aircraft before. Following the flight, women pilots will be available to any questions about general aviation or a career in aviation. Our fun female factoid for New Mexico? This is where the first woman pilot became qualified in the Osprey CV-22 tilt rotor aircraft! This was just accomplished in 2011 by First Lt. Candice Killian of the United States Air Force.

From the first women airline pilot, to the first qualified in the Osprey, from Maine to thousands of miles over to Arizona, the United States is gearing up for a remarkable Women Of Aviation Week!