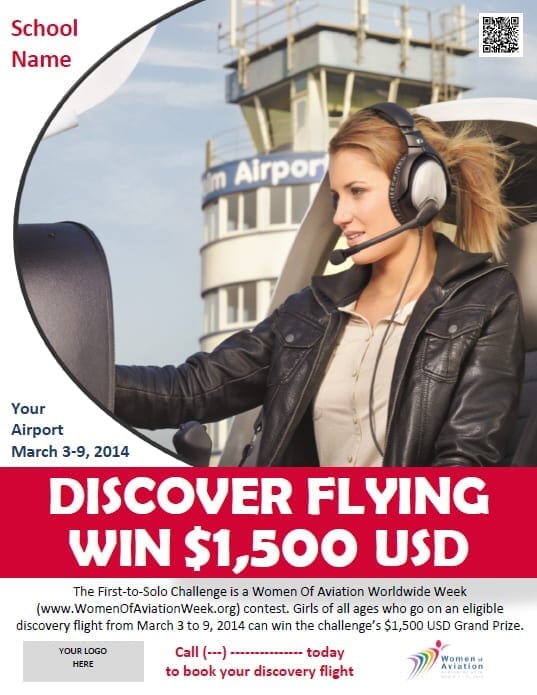 Any girl or woman, anywhere around the world, who goes on a discovery flight during the 2014 Women Of Aviation Worldwide Week, March 3-9 2014, may be eligible to win the prize.

To qualify for the prize, girls and women must go on either a commercial or free discovery flight from March 3 to March 9, 2014 included; the pilot must file a proper flight report; and the prize applicant must declare her intention to learn to fly before starting flight lessons.

The first eligible applicant to conduct and document her solo flight after discovering flying during the 2014 Women Of Aviation Worldwide Week will win a $1,500 USD credit on her account at the flight school of her choice to assist her with her next step in her aviation education.

Although attracted to the idea of flight, 2013 First-to-Solo Challenge winner, Lindsay Kitson of Winnipeg, Manitoba, thought that becoming a pilot was “something that people more awesome than herself got to do”.

She learned otherwise by attending the Women Of Aviation Worldwide Week event at the local St Andrews Airport. Two months later, she was soloing. Now a Private pilot, she is taking flight lessons to obtain a Commercial pilot license.

More than half of the girls and women who attend Women Of Aviation Worldwide Week events across the world annually are inspired to become a pilot. The First-to-Solo Challenge aims to turn that enthusiasm into action.

Sennheiser is offering this prize in partnership with the Institute for Women Of Aviation Worldwide as part of its Live Your Dream program. The program is a key implementation of Sennheiser’s stewardship towards its constituency. Through industry collaboration, it aims to provide the extra support to assist aviation enthusiasts like Lindsay Kitson to materialize their dream of flight.

Flight schools and flying clubs interested in promoting discovery flights to qualify their aspiring female pilots for the prize are encourage to download our ad templates.