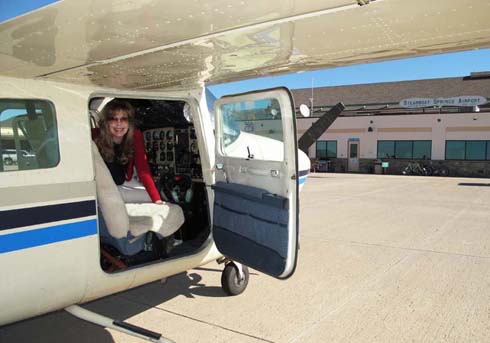 From March 4 to March 10 2013, over 2,100 volunteers across four continents – Africa, Asia, America, and Europe – introduced more than 17,000 girls and women to the opportunities available in the air and space industry as part of the Women Of Aviation Worldwide Week celebration, held annually during the week of March 8, anniversary date of the first female pilot license worldwide.

Studies have demonstrated that a key barrier to women’s participation in the technical fields of the air and space industry – approximately 12% overall; 5% for pilots – is the lack of awareness of the opportunities available to them. Women Of Aviation Worldwide Week aims to foster diversity in aviation by celebrating history, raising awareness, and sparking vocations among the female population.

333 pilots flew 109 types of aircraft for more than 1,500 hours – enough hours to fly 12 times around the globe in a small aircraft – in order to introduce 5,316 girls and women to flying. For reference, the largest female airline pilot rated population resides in the United States and totaled 5,818 in 2012.

Friendly competitions held as part of the Fly-It-Forward® Challenge reward aviation enthusiasts that excel at enticing their local female population to discover the air and space industry.

The most coveted title, ‘Most Female Pilot Friendly Airport Worldwide’, is awarded annually to the airport community that offers and documents the most female first flight experiences in approved aircraft throughout the week.

In 2012, more than 400 flights allowed Yellowknife in the Northwest Territories, Canada, to win the title. The top three contenders in 2013 orchestrated more than 500 flights each.

80 local businesses and associations supported the event that offered far more than just flights to the close to 3,000 attendees. Prominent Women Of Aviation were on hand to inspire and answer questions, instructors operating 4 simulators gave hands-on experience to the girls and women, local flight schools and associations informed attendees about the next steps, and potential employers presented all the options available.

Oakes won the $1,000 training prize awarded to the organizer responsible for the event yielding the most effectiveness and outreach overall. Number of flights, number of volunteers, number of women who take the next step and amount of press coverage are a few of the criteria to win the prize.

“The end result is about 40 gals signed up for ground school,” said Oakes.

Yellowknife, Northwest Territories, Canada, is the first runner up in the category with 634 flights and Kitchener-Waterloo, Ontario, Canada, the second runner up with 517 flights. Frederick, Maryland, USA, retains its honorary title of ‘Most Female Pilot Friendly Airport in the USA’ with 342 flights.

Female pilot friendly regions stood up as well. The province of Ontario in Canada was responsible for more than 1,400 flights; Washington State totaled more than 400 flights between events in Seattle and Twisp.

Acknowledging that creating excitement is only the first step to increasing diversity in aviation, the Institute for Women Of Aviation Worldwide created a new title in 2013: ‘Most Female Pilot Friendly Training Center Worldwide’. This title is awarded to the training center that fosters the most female introductory flights during the week.

Waterloo Wellington Flight Centre, based at the Kitchener-Waterloo airport in Ontario, Canada, won the world title with 517 flights. The first runner up is Calhoun Air Center based in Victoria, Texas, USA. Rounding out the top three is Rockcliffe Flying Club in Ottawa, Ontario, Canada.

Many prizes offered by the partners and friends of the Institute for Women Of Aviation Worldwide were distributed to pilots, volunteers, female first time flyers, and contest winners.

New records were set in all categories and constitute the new reference numbers to win a title during the 4th annual Women Of Aviation Worldwide to be held from March 3 to March 9, 2014.