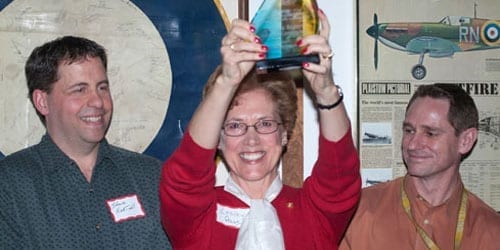 It is the right thing to do but it doesn’t hurt to be acknowledged and praised for your good deeds!

That’s why, during the 2011 Women of Aviation Worldwide Week, there are 7 trophies and 14 plaques to reward the winners as well as 1st and 2nd runner ups for the following competitions:

But, that’s not all. There are also over 50 prizes available, aviation t-shirts, DVDs, books, safety seminars, watches, and cold hard cash. Seven pilots, anywhere in the World, who introduce five or more girls or women to flying during Women of Aviation Worldwide Week, will up prizes worth up to $150 USD.

Never has doing a good thing, introducing a girl or woman to flying, been so rewarded! First, the delighted smiles of the girls and the women you introduce to flying, then the personal recognition within your community, and finally trophies and prizes.

Invite girls and women who have never flown in a smaller aircraft to go on a flight with you. Find them at your workplace, at your children school, at your church, or anywhere else you may think of. Girls and women constitute more than half of the human population, there are not hard to find! You will be amazed at how easy to find a girl or a woman who wants to fly. Just try it!