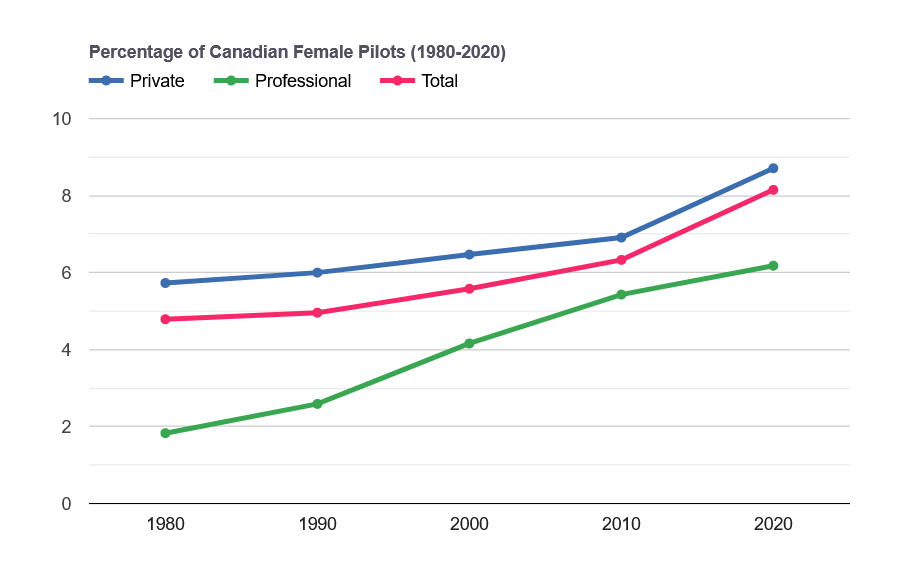 Canadian media routinely and erroneously cite U.S. statistics as Canadian statistics. The facts are that Canadian women lead the American continent (from the North Pole to the South Pole) in both numbers (adjusted for country population) and percentages.

See What five decades of FAA statistics reveals about women progress in aviation published in August 2011 for details about the situation in the United States between 1960 and 2010.

The first woman to fly in Canada was American pilot, Alys McKey Bryant. She or her husband visited British Columbia in 1913 during their exhibition tour of the Pacific Northwest. Canada would have to wait another 15 years before a Canadian woman got a pilot licence.

Steady numbers in private aviation since 1980

Most Canadian flight schools observed a significant uptake in female student starts since 2010 but that will not necessarily convert into women flying in the Canadian skies.

“We are currently issuing commercial licences at roughly 50% to foreign pilots,” Craig Stewart, a Transport Canada Technical Officer, noted in 2019. “With half the necessary training to move up to an ATPL going to those with no intention of carrying on in the Canadian system, it is inevitable that our numbers would drop.”

While most industries have made significant efforts to attract female customers and employees in the last few decades, the air and space industry is still lagging. As an example, long gone are the cars that would require the smaller-framed female driver to bring cushions along; that’s not the case with most new aircraft. More revealing, there was no widespread female outreach efforts before the inception of Women Of Aviation Worldwide Week in 2010.

Surprisingly, Canada did not have any national women associations although they were a few scattered chapters of American associations. However, Canadian membership money travelled to U.S. headquarters more concerned with advancing American women than lobbying the Canadian government and the Canadian industry stakeholders on behalf of Canadian women.

Since 2010, the Institute for Women Of Aviation Worldwide has not only exchanged with the Harper and Trudeau governments, engaged national industry associations like the Canadian Owners and Pilots Association who begun to encourage its members to introduce more girls of all ages to flying in 2012, it has also inspired the foundation of a multitude of homegrown women outreach initiatives.

The numbers reveal the harsh reality. However, a portion of the severe drop is likely linked to seasonal expatriate pilots returning home during the crisis and, staying there.

In the air traffic control sector, more men than women lost their jobs. The attribution rate was 37% for men versus 31% for women.