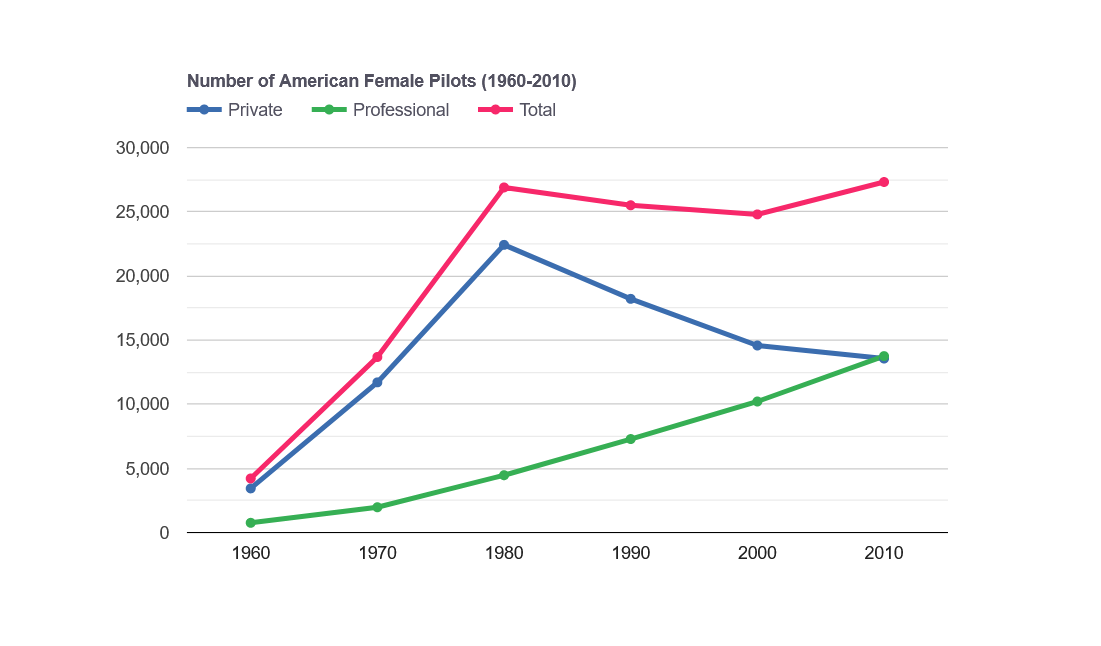 How rare are American female pilots? According to FAA statistics, to have a chance to randomly meet one female pilot holding a fully-rated pilot certificate (i.e., other than student), you had to encounter 21,417 women in 1960. The ratio became one in 4,224 in 1980, the highest ever. By 2010, the ratio decreased to one in 5,623 women.

See What four decades of Canadian statistics reveal about women progress in aviation published in March 2020 for details about the situation in Canada between 1980 and 2020.

Significant progress between 1960 and 1980; virtual standstill ever since

Since I started advocating for more women in aviation during the Centennial of Licensed Women Pilots in 2010, I have been delighted with the amazing interest, support, and enthusiasm towards changing the trends, but also saddened to realize that, after over one hundred years, the state of our inclusion was not as advanced as it could be, and dumbfounded by some of the misleading information circulating concerning the presence of female pilots.

As a result, I requested hard data for the last 5 decades (1960-2010) from the FAA. Carla Colwell, Information Systems Manager for the FAA, had to go through the dusty archives at the FAA’s Airmen Certification Branch in Oklahoma City to provide me with the information. Thanks to Carla, I can share this data with you.

So where were we in 2010? There were 27,451 women holding a fully-rated pilot certificate (i.e. other than student) in the United States. This number has remained virtually unchanged from its 26,896 value in 1980. The percentage of female pilots is 5.39%.

Over the last five decades, most of the female pilot population growth took place between 1960 and 1980, a time when a strong feminist message encouraged women to try activities previously perceived as reserved to men. During those two decades, the number of female pilots went from 4,218 to 26,896 and the number of women holding a professional pilot certificate went from 763 to 4,473.

The number of female professional pilots increased by 3,000 per decade, each decade, since 1970

Despite the progress of women in the professional category, they represent only 5.15% of pilots holding a professional pilot certificate. However, the U.S. Department of Labor reports that only 4.3% of the population that reports making a living as a pilot or flight engineer is female. If you think that you are seeing more women flying for the airlines, you are right. However, out of the more than 76,000 persons reporting their income source as a pilot or flight engineer, only around 3,200 are women.

Female pilot growth is lagging behind other traditionally male-dominated professions

When we compare the progress of professional female pilots to other professions previously male dominated, the progress seems dismal. Female air traffic controllers now represent 26% of the air traffic controller population. Female flight dispatchers stand at nearly 18% of the people working in this field. Even female aerospace engineers have made greater progress. Virtually non-existent in 1960, the percentage of women making a living as aerospace engineers reached 9.2% in 2010.

Regardless of the potential effect of cost factors, cost issues apply equally to male and female pilot candidates.

A 2004 study by S.J. Correll titled “Constraints into preferences: gender, status, and emerging career aspirations” might produce a better explanation. During the study, when women were told that men were typically better at completing a given task, they assess themselves as worse than average while men would assess themselves as better than average. A self-fulfilling prophecy.  On the other hand, when women were told that they were as competent as men at completing a given task, they assessed themselves as average and so did men.

This study highlighted the power of perception. Aviation has traditionally been presented as an activity in which men naturally excel. People do not undertake activities or careers when they do not believe they can succeed. As a result, qualified women are less likely to consider flying than their male peers.

The flight training environment is a barrier for women

Despite the cost and perception challenges, women do travel to airports with the intention of learning to fly. Since 1980, more than 11% of student pilots have been women, yet the number of female pilots holding other-than-student pilot certificates has remained steady. This fact points to another barrier to women’s success in aviation: the flight training environment.

A woman is often isolated and receives little emotional support as she goes through the normal up and downs of flight training. Because most flight instructors are male flight instructors, effective communication between the instructor and the student is often harder to establish. Training programs are designed for the typical flight student: a young, mechanically-inclined male. Unless she is mechanically-inclined or lucky enough to find a talented instructor who can explain the information in a manner that she can comprehend, she might have trouble learning the material. Moreover and according to the findings of S.J. Correll’s study, she believes that she has to achieve a higher level of comprehension than her male counterpart just to be an average pilot.

Women seem to face more hurdles in the flight training environment than men do, but both male and female pilot candidates have to deal with the flight training industry’s increasing ineffectiveness at training pilots. Out of all pilot candidates committed enough to learning to fly that they obtained a medical/student pilot certificate, 65% became unrestricted pilots in the early 1990s; today, less than 35% do.

While most industries have made significant efforts to attract the female customer in the last few decades, the air and space industry is still lagging. As an example, long gone are the cars that would require the smaller-framed female driver to bring cushions along; that’s not the case with most new aircraft.

More revealing, there was no widespread outreach effort before the inception of Women Of Aviation Worldwide Week in 2010. Existing women associations – most founded in the late 1980s and early 1990s – were content with providing support and networking to the women already in industry in addition to offering a handful of scholarships provided the candidates became members first.

Women Of Aviation Week Outreach Scope in the United States

Women are the silver lining of aviation

Things are changing. As we celebrated 100 years of licenced female pilots in 2010, the industry started to take a closer look at where it stood in terms of integration of women. More photos of women pilots started showing up on aviation websites, more articles about successful women pilots were written, and studies examining some of the hurdles faced by female pilot candidates were commissioned. As I launched the annual Women Of Aviation Worldwide Week celebration in 2011, aviation businesses, associations, and individuals eagerly joined in to introduce girls and women to the opportunities aviation has to offer them.

In 1985, motorcycle manufacturer Harley Davidson decided to target the female customer. At the time, it was selling only 2% of its bikes to female customers. It took faith, it took determination, and it took a financial investment to change things. But, the rewards were huge. By 2003, women were buying 10% of their bikes.

A change of marketing message coupled with learning how to serve the female customer yielded a five-fold sale share increase in less than two decades! But, wait a minute; we have already generated a similar growth… between 1960 and 1980.

A pool of talent virtually untargeted, women are the silver lining of aviation. However, it will take an industry-wide collaboration to change the current trends. A strong message was proven effective in the 60s, and 70s. Women Of Aviation Worldwide Week is designed to send a strong, unified, positive, and “Aviation wants you” message to girls and women.

Please, join us as we celebrate the upcoming Women Of Aviation Worldwide Week. Together, let’s show women and girls how welcoming to women the aviation industry really is and how eager we are to include them. Then, let’s sit back and watch the numbers grow. These are exciting times!