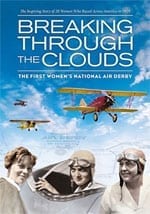 In November of 1910, Hélène Dutrieu became the 4th woman to earn a pilot license worldwide. One year later, in May 1911, she beat 14 male pilots to become the first woman to win an air race worldwide.

Tomorrow, nearly 50 women pilots will take off from Alliance, NE, to compete in the Air Race Classic, 82 years after the tradition began.

Indeed, it was August 18 1929 when 20 female pilots pulled on britches, snapped on goggles, climbed into their cockpits, and took off from Santa Monica, CA, to compete in the first ever Women’s Air Derby, commonly known as the “Powder Puff Derby”.

There was the media darling, the Hollywood starlet, the aviatrix record breakers and the unforgettable foul-mouthed wife of a preacher. Together these women were flying in the face of anyone who believed women belonged on the ground.

Breaking Through The Clouds, the documentary that tells their story, received an Indie.

This fantastic film that includes actual footage of the 1929 air race will be playing at various theaters at AirVenture 2011. If you can’t make it to AirVenture to view the film and meet with its director and producer, Heather Taylor, you can order the DVD online to be shipped right to your home.