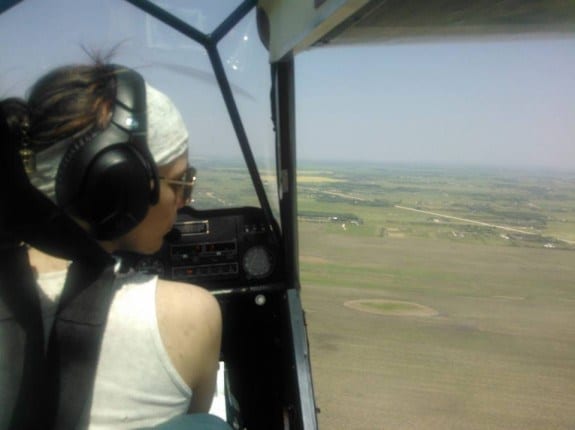 “If you asked me if I thought women could be pilots, I would have said yeah, for sure. But it never occurred to me that it could be me.”

Lindsay Kitson, a talented young writer afflicted by Asperger syndrome, was fascinated by flight but she never thought about becoming a pilot.

In 2013, she attended a WOAW event in Winnipeg, MB, Canada, and took iWOAW’s First-to-Solo Challenge.

What are up to, Lindsay?

I am just basically bush piloting, flying a Cessna 207, carrying freight and passengers.

Did you consider learning to fly before WOAW?

Well around that time, I had been talking to a co-worker and musing about how I thought that flying would be the most coolest thing in the world to do and he said: “Well, if you think it’s so cool why don’t you go get a pilot’s license.” No one had ever told me that that was a possibility for me, specifically for me. I mean if you asked me if I thought women could be pilots I would have said yeah, for sure, but it never occurred to me that it could be me.

What made you attend the WOAW event?

I checked into the local flight school and they told me that there was this woman of aviation day going on, that I should go to it and so I checked that out. When I was there, I got to talk to the instructors and the instructors were like there’s this first to solo challenge award that they are doing. You should try and go for that. I was like you actually think that just random me could actually do that. They were like yeah, sure.

Once you took the First-to-solo challenge, what did it take to win?

What is the most challenging for women learning to fly?

The instructors, male or female, it does not matter. I think that it’s important for them to remember that, when you deal with a female student, she’s gonna get all of these voices coming from places that he or she is not going to hear either, from family or from strangers outside the training environment, people are going to be telling her “Are you sure that’s a good idea? Isn’t it dangerous? What if you want to have children, what kind of a life do you want to give your family if you want to be a pilot as a career?”
As an instructor, you have to be the voice of holding that away even though you don’t hear those things being said. I think you got to remember that she’s gonna be hearing those things.

I think this award is really good for getting people motivated and but also because the school can get involved in supporting someone who wants to try to win this, the First-to-Solo award. If they’re at a school and the school is informed that they’re eligible for this award and they might have a good shot at it. and they’re not doing their best to make sure that that students is yes yes enough slight average and quickly and and should try and minimize schedule conflict stuff like that they see. The instructors at my school were aware of that so they were encouraging me and making sure that there was not anything standing in my way.

How was that first solo?

That’s different when you’re out solo than when you are with an instructor because when you are with an instructor you are constantly, they are going to be giving you feedback. You are kind of just paying attention to them and thinking about how they are judging your landings because judging your landings is just literally their job. They are not there to nitpick on anything anymore. You just you there to do your thing. So yeah, it was exciting and relaxing at the same time. I don’t know how about how else to describe it but I was pretty damn proud.
The first I always called was my grandma. She was super proud. She was 92 at the time. She had lived a fairly sheltered life and she was afraid of flying. But even though she was afraid of flying and maybe she was old-fashioned a little bit, she didn’t believe in holding anyone back from doing something that they they made them happy and she was always really proud of me.

What is your dream flying job, Lindsay?

I’d like to fly medevac for at least for a little bit. I don’t know if that would be something that I would do permanently but I’d like to do it for a little while. There is one thing that I want to make sure that I get to do at some point in my career and if I didn’t get to do that I would feel like I missed something that I really wanted. It’s aerial fire suppression. When I was about five, people would ask me “What do you want to be when you grow up, Lindsay?” I told them I would be a firefighter. When I started flying, I realized that, you know, that could be a possibility, yeah. I’ve talked to a couple of people who’ve either got contacts and or do it and it doesn’t sound like it’s something that’s gonna be super difficult to get into either. So I think it’s definitely something that I’m gonna get to do at some point once I’ve get enough hours.

What in your childhood do you think prepared you to succeed?

As far as family influences, my mom would be the one that probably did the most to make me believe that women, and that me as a woman, could do whatever I wanted and that it’s never too late to start something new. She went back to school when she was probably about 40. And then, on the other hand, my dad, aside from his comments about her upper body strength, has financially backed me a fair bit. I mean he wanted to see me get at least a certain amount of the way in before he’d actually started putting money into it himself so that he’d know that I wasn’t just doing this for fun then I’m gonna ditch it for another career idea. That’s not right but once I was far enough and then then he was behind me.

What’s most effective when reaching out to women and girls?

Do you Fly It Forward®, Lindsay?

I mean, obviously. I don’t even have to really explain why. It was special because that was the day everything got started for me and then, I get to go and do it for someone else. Yeah!