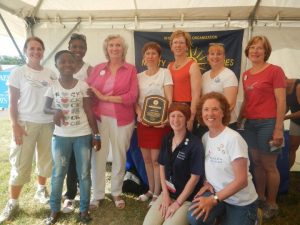 nture in Oshkosh, Wisconsin is not always about the aircraft, it’s about the pilots and aviation enthusiasts who attend and about making new friendships and rekindling old ones. Thursday morning, especially, was about the ladies! This was the morning of the Ninety-Nines breakfast as well as the presentation of the Award of Inspiration to Mireille Goyer, founder of Women of Aviation Week.

After a warm introduction from the previous Ninety-Nines president, Mireille began a speech telling the remarkable story of how her non-pilot mother’s love of flying had encouraged four of her six children- two of which are now female pilots- to enter the aviation industry. Mireille then shared how WOAW came to be and how important it is to the aviation community. Later, she introduced to the group the team leaders for the United States and Canada for the next Women of Aviation Week.

The breakfast was about socializing with fellow female pilots, encouraging the growth of women into aviation, but most importantly, it was about inspiring each other. Nowhere else in the world can so many women pilots from completely different walks of life come into the same room and bond so quickly. Nowhere else can a plethora of unique stories be shared and smiles exchanged. This experience is something that needs to be shared and can no longer be kept secret from future woman pilots.

Last year in the United States during Women of Aviation Week 392 girls and women in 5 states received their first small aircraft flights. The Frederick Municipal Airport in Maryland event earned the most Female Pilot Friendly Airport in the United States award and was runner up worldwide. With an event planned in Frederick, MD once again and interest peaking in nearby states, could the Women of Aviation Week Worldwide title be brought back to the States? Can you imagine the impact of having an event in each state?