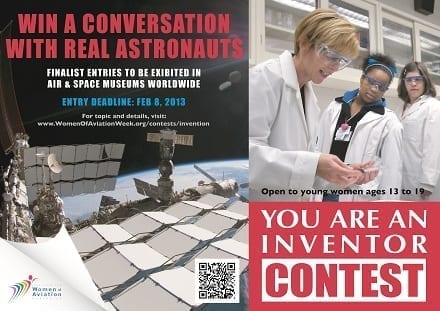 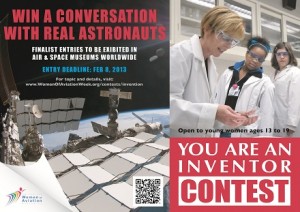 If you met a real astronaut, what questions would you ask? Some lucky teenage girl(s) will have a chance to ponder about that in April 2013 but, first, they need to conceive a winning invention.

After discovering the world of science during her preparation leading up to her flight in space in 1963, Valentina Tereshkova studied to earn a doctorate in physics. However, as we prepare to celebrate this important milestone, the lack of female scientists continues to be reflected in the women unfriendliness of many products.

As a salute to all the pioneer female scientists and to spark vocations, we are launching the ‘You are an inventor’ contest. The top prize? A conversation with real astronauts.

To win this amazing once-in-a-lifetime opportunity, teenage girls from around the world will have to fulfill a mission: conceive a new padding system or a new type of adjustable space suit that improves freedom of movement for tomorrow’s space explorers.

What a rewarding opportunity to practice being a rocket scientist!